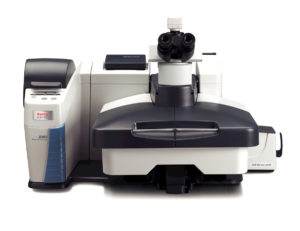 The nicotine transdermal patch itself consists of several layers: a protective layer, an adhesive layer, a membrane and a protective pad. The protective layer serves to protect the adhesive layer and the active substances which are stored in the membrane. The protective pad then serves in particular to protect the other layers while the patch is being applied. For quality control and analysis of the dynamics and mechanism of release of active substances, it is essential to know the exact folded patches, traditional methods of analysis are lengthy and destructive and the patch cannot be used for further measurements (eg CG-MS, LC-MS, SEM, TEM). Therefore, the use of confocal Raman spectroscopy and a Nicolet DXR3or DXR3ximicroscope is a very elegant way to solve this problem.

The first layer was identified as PET (polyethylene terephthalate). The second and fourth layers contain microporous PE (polyethylene) gradually releasing nicotine, which is contained in the ethylene/vinyl acetate copolymer (EVA) in the third layer. The fifth layer (adhesive) is polyisobutylene (PIB) and again PET. It can be seen in Figure 4 that the third layer (EVA) serves as a nicotine reservoir. These identification analyzes can be performed using the patented multicomponent search function without the need to modify the measured spectra. Not only did the analysis identify nicotine in a given layer (green in Figure 4), but it also determined its relative spectral representation of the component relative to the second component (EVA, orange). Representation is not directly applicable for quantitative chemical analysis.

Many of the techniques currently used for the analysis of similar samples are time consuming and often destructive. Raman spectroscopy - in addition to being non-destructive in a well-chosen experiment, it is also a fast technique, and thus allows monitoring of a number of processes that are not observable by other techniques. In combination with a number of sophisticated algorithms, it becomes an irreplaceable part of every modern laboratory. 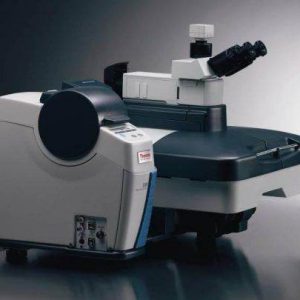 The Nicolet DXR3 Dispersi Raman Microscope is an instrument designed for applications requiring high spatial resolution, ease of sample preparation, and the use of the strongpoints of Raman microscopy. 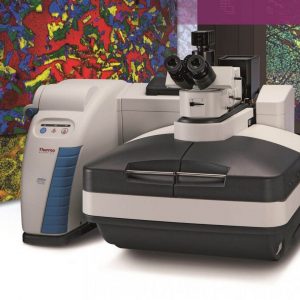 The user-proven DXR Raman microscope is now available in the new version of the DXR3xi with a high-performance EMCCD detector and a microscopic table with the possibility of nanoslift for super fast Chemical Imaging of your samples.