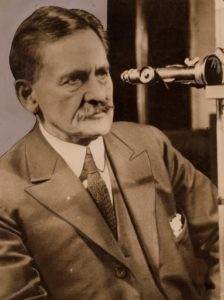 Another father of modern spectroscopy is Albert Michelson (December 19, 1852 – May 9, 1931). He was born in Poland into a Jewish family, so even before he learned to speak, he emigrated with his parents to the USA during the so-called California gold rush. He received a scholarship to the Naval Academy, where he studied optics, climatology and art. Like his French predecessor, this great physicist enjoyed a wide range of interests.

He improved the design of the binary star interferometer and, with his colleague and friend Simon Newcomb, refined the speed of light in air and vacuum. In addition, he refuted the concept of ether and became the first American to receive the Nobel Prize in Physics. The design of the Michelson interferometer is so perfect that it was possible to detect gravitational waves in 2020.

In FT-IR spectroscopy, the Michelson interferometer is used to capture the measured spectra very accurately and it is one of the elements that will be very difficult to overcome with something better in the future.

Please fill in your initials and we will get back
to you as soon as possible.